The next day we stopped at Nakoweap after a 9 a.m. shove off off time. I knew we were getting the group systems down and this showed it! Pulling into an eddy after running one of the longest rapids in the Grand Canyon, we confirmed the group that passed us last evening actually stayed there. The Nankoweap Granary is a series of stone and mortar storage bins situated high up in the cliffs. These bins were constructed by the ancient Anasazi people to store their seed stock and food. The short hike to the graineries rewarded us with yet more amazing views. The canyon rim, at least 5,000 feet above us, was caped with frosted white from a recent snowstorm above. 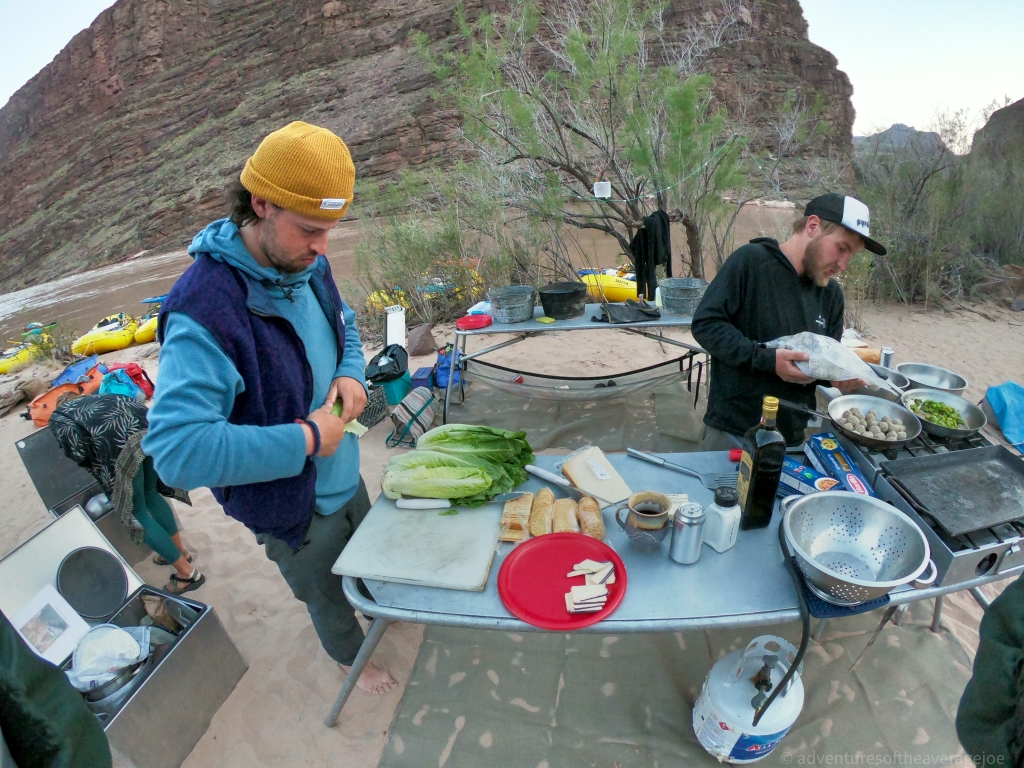 After rowing 14 miles we made our home for the night at Above Little Colorado Camp, because we missed the spot we were aiming for. Unfortunately the raft that persisted on passing the lead raft could not read a map. This worked out great because it set us up for the Little Colorado float we were going to do the next day. Setting up a camp takes a lot of work. The group unloads everything from the boats that will be needed. Lets just talk about the kitchen for a moment. The first thing you have to do is put down tarps to catch any food scraps, next you set out tables in a L or U formation on the tarps. If the tables are not stable, luck would have it that there are an abundance of smashed beer cans that can be used as shims for leveling out the tables. We strove to keep and abundant supply available for just such emergency.  Next in the kitchen assembly came the metal boxes filled with the pots, pans, and everything else one would need for cooking if one can find where the last person put things. At this time the stove is being attached to the propane and the grill is being set up. The blaster, a one burner water boiling machine, is hopefully being assembled far enough away that it doesn’t catch anything on fire. Now that things are ready to cook, someone is trying to find all the food. The dry goods are taken out of an ammo can, not to be confused with the groover ammo cans. This can now becomes a trash receptacle. At this point be prepared to fight off the ravens that have been waiting for you to turn around so then can make off with dinner for minimal effort.  At this point every cooler has been looked into twice and still no main course; oh wait, there it is!  Just as the cooking is reaching its crescendo, the cleaning begins.

Pro cleaning tip: have the trash at the head of the dish line so if by chance there are leftovers they get scrapped off. Next in the system are 3-4 metal buckets, 4 if you want to presoak, 3 is your a normal lazy person setup. The first one is hot soapy water, second is hot rinse water, and the third is a cold bleach soak. SO there were a lot of RULES for the buckets.

I feel like we cranked the blaster up and set the buckets on the sand….. we also scalded our hands, dammit should have followed one of the rules. After the dishes are washed all the water has to be filtered into mesh to collect the food particles.  The food particles are then forced into the overflowing garbage. Lastly the water is pored into the river.

A lot of work goes into setting up camp; this was just a example of dinner. Meanwhile a fire was set up over a fire pan, since you have collect and pack out the ashes. All of these steps help to minimize the impact and make it feel like you are the only ones there. It’s a hassle but well worth it to keep the area pristine and available for use. That night the wine flowed freely leading into a glow stick party.