We have another slow start this morning. As I finish strapping down the the last dry bag, I know we are on the verge of getting our routine down, even though we haven’t pulled out of camp much before lunch time yet. The group has our sights set on Nankoweap for the evening which has a nice large camp complete with a beach for all the activities. Stopping for our first hike of the day Buck Farm, most of us fully dressed in costumes, we anchor our rafts. Buck Farm is a popular side canyon hike. The canyon drains the east side of the Kaibab Plateau, also known as Buckskin Mountain. Buckskin is an alteration of the Southern Paiute word Bucksin, meaning mule deer. Hiking up the canyon, the group split half to the left, half to the right, after passing Jared perched on a boulder rocking out to a portable speaker, American flag waving over his captain’s hat. The path I had chosen cliffed out after a short scramble as we tried to it to make higher, flatter ground so as to continue the hike into the canyon. Eventually everyone on the left hiked back. Some tried the right side and those intrepid hikers were rewarded with finding mule deer antlers while the rest were rewarded with the beauty of the place.

Saddle Canyon was our last stop before Nankoweap. We didn’t make it here until later in the day putting a huge time pressure on the group. The stronger and/or more determined hikers got to the waterfall, took a quick look around, and rushed back. As I was passing people on their pilgrimage towards the waterfall I knew at some point I was going to have to tell people they were going to have to turn around. I know you can’t make everyone happy and let everyone do what they want on a trip with this many people, but I really wanted everyone to have a good time and I felt like the trip just wasn’t set up for that at this point. I was trying to find a little more balance as the trip progressed. I kept checking the time compulsively finally telling people to turn around. Shortly after I realized I didn’t have to have anyone turn around, because I made it back to the boats just in time to see a group pass us. I knew right away they were headed for where we wanted to camp. 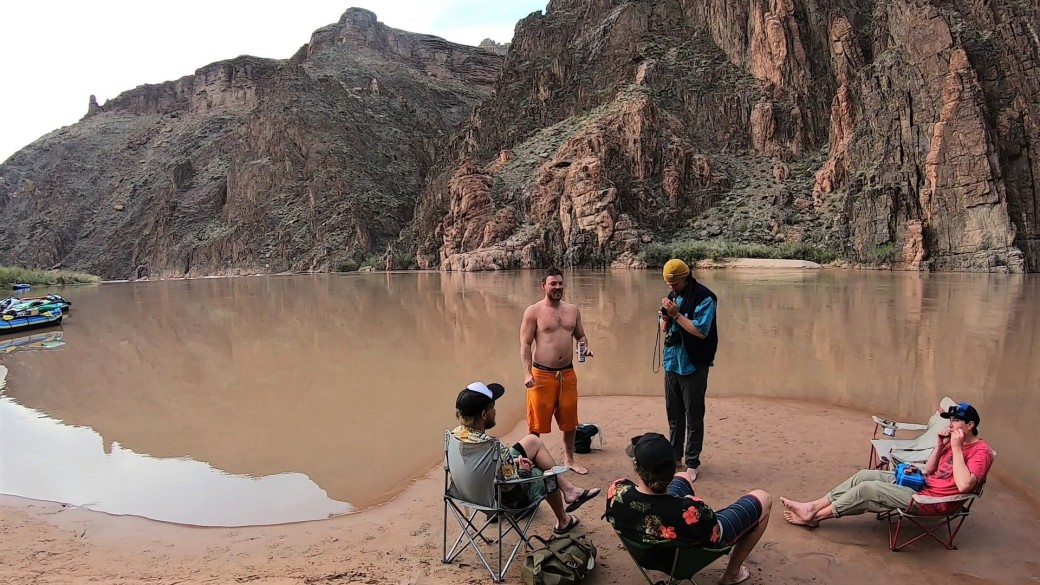 As a result camp was set up where we were at for the night. Tonight was also my group’s turn to cook, I volunteered to set up the groover, which is the toilet, so named because back in the day they didn’t have seats and the metal box would leave grooves on your butt. This particular groover was an olive colored ammo can with a toilet seat attached on it. If you have never used one before let me give a brief description. The ammo can is for solids only, the liquids are what causes most of the smells. A separate container, in this instance a bucket, was beside the groover so you could separate the two. I personally found this difficult to do a first. The reason the liquids went in to a bucket was because on the Grand Canyon your are supposed to go number one directly into the Colorado River. Dilution is the solution to pollution. 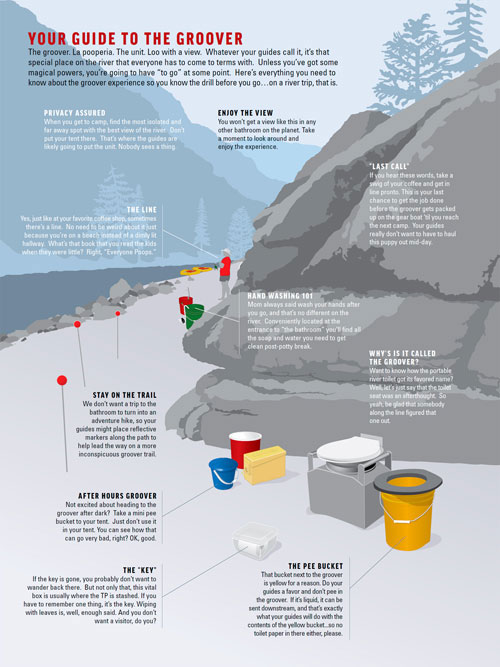 I felt I should take the first turn setting it up in my cook group, being the trip leader. It just happened to be the easiest task to do. I got done with the groover in no time and since we decided to stay where we were instead of pushing on to a different campsite this was the first time in four days I got to relax a little. I highly suggest volunteering to set up the groover so you can enjoy your evening.