It’s hard to believe it’s already been two days since we started this trip early Sunday morning , March 24, 2019, with a cancelled Uber ride with hardly any notice given. There is nothing like starting a trip of a lifetime with, “Oh by the way, we are not picking you up.”  Good luck getting to the airport at 3 a.m. Panic starts to set, its hard to think being only a few sips of coffee in, but as luck would have it, Jackie’s roommate was just getting home from her shift working as a bartender! Finished the life giving coffee, loaded bags in car: check, reload bags because rear hatch won’t shut: check, damn we have a lot of shit, and then we’re Grand Canyon Bound!

Meeting up with friends at the airport there is excitement in the air as we get preflight drinks. This was also my first time flying with SouthWest. I was not a fan of the free-for-all seating and haven’t flew with them since. I had gotten a SouthWest branded credit card for the trip, but promptly cancelled and went back to using my Delta Amex right after the trip. The yearly fee is worth the better flight for me. even the flights themselves are slightly more expensive but the perks are better in my opinion.

We arrive at the River House, a rental where we will prep and consolidate our personal gear which at this point consists mostly of alcohol while the rest of the people going on this trip trickle in. The crew is comprised of mostly current or previous river guide staff from Laurel Highland’s, a rafting company located in Ohiopyle, PA. Micah was the last to arrive because he got the wrong flight. Once everyone was there, we wrapped up the National Park’s pretrip information packet.

We woke up to coffee and breakfast the morning that our trip actually begins, March 26, 2019, complements of Tim and the other dude from Moenkopi, the outfitter we rented our gear through. After eating, our group met the other group launching that day. Our first impression of them was “what a bunch of ass hats.” Baldy, as I will affectionately refer to the chief ass hat, informed us they were doing 17 miles that day and were in a hurry and would appreciate it if we didn’t ask any questions. Some of them then showed up late to the presentation. During the orientation, the ranger asked by show of hands “Who’s been down the Grand Canyon before?” as expected every hand in their group went up and one hand in ours went up. I heard sounds of haughtiness escape their sneering lips. Then the ranger asked how many people were river guides and almost all the hands in our group went up compared to a couple in their group. That’s right Baldy, take that, you guys actually suck! After we adjourned from the rangers meeting, we packed all our stuff, and picked up all the beer cans from the party the night before. We then made our final trips to use the facilities with running water because, with the exception of Phantom Ranch, this will be our last opportunity for the next 21 days. Pushing off at around 11 a.m., watching Ryan on shore talking frantically into his phone trying to come up with a plan for his parents to get him some last minute gear, as we row towards our adventure where we will have a steep learning curve. Most of us have never used oar rigs before since our guiding was chiefly done by stick. We pass Baldly and his well oiled experienced crew, screaming, “You better hurry up you have 17 miles to go!” as some of us crack our fist beers and while starting to figure out how to row our rafts.

Ryan catches up to us and informs us that in 4 miles his parents were going to throw a bag of his stuff off Navajo Bridge located 467 ft. above the Colorado River. There was much speculation and debate about this over the next hour. “Can he catch it?” “It will kill him!” “They should put it in a dry bag.” “Yea and add air so it floats better.” “Will it reach terminal velocity?” “We are going to jail!” “The rangers will think we are doing a drug drop!” “Great, they will search our bags!” 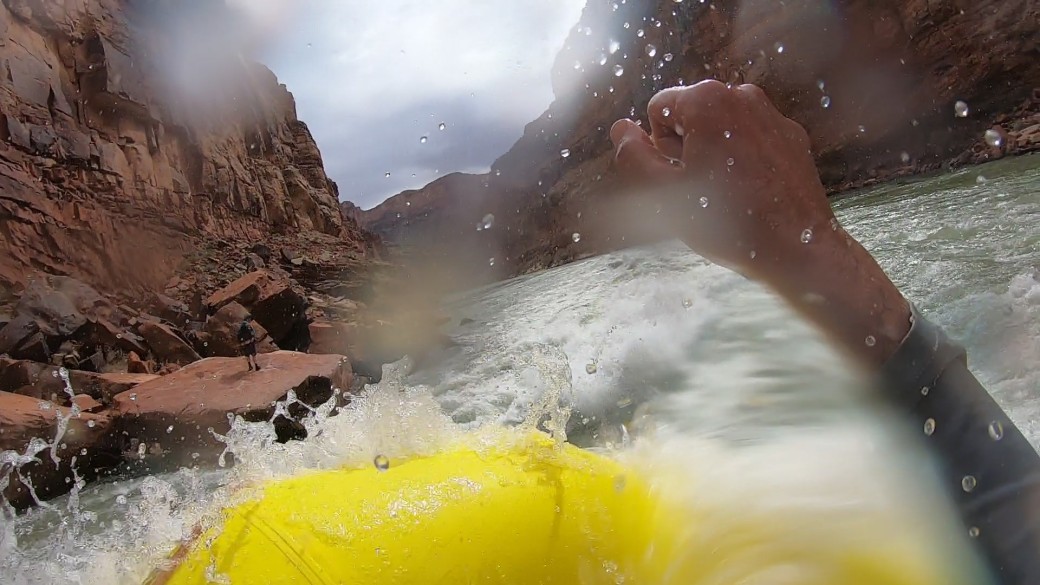