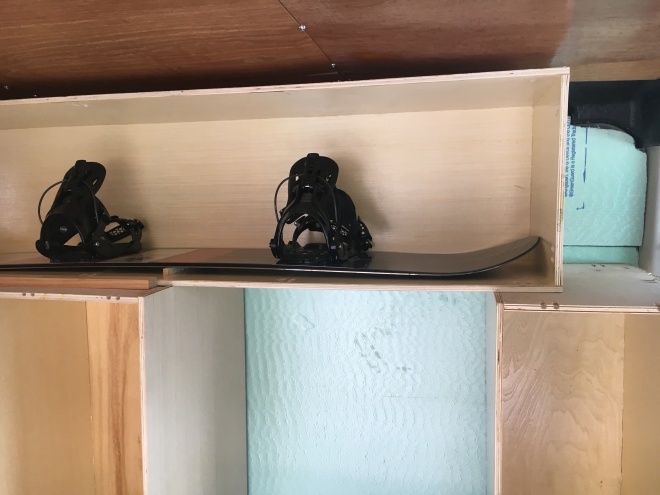 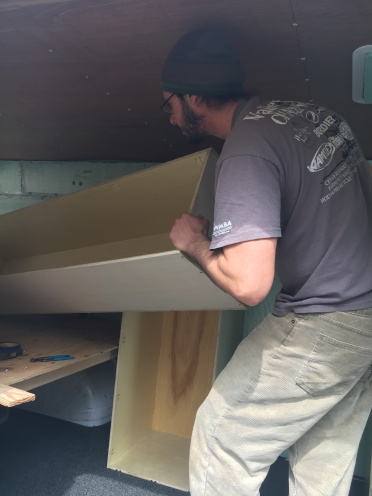 After all the insulation, walls, ceiling and floor were installed I moved to the finishing touches, starting with the cabinets against the drivers side wall. The top horizontal cabinet was not partitioned, so as to fit snowboards or paddles. I did drill a couple holes and tie paracord on both ends inside of the cabinet so I could tie things down. 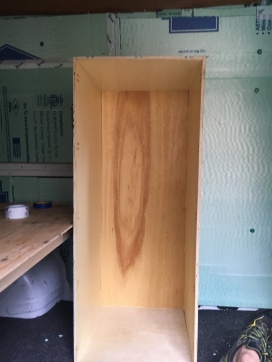 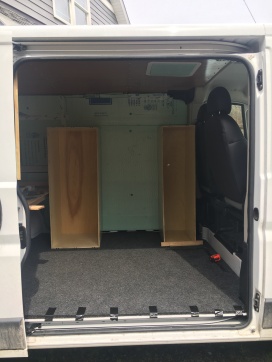 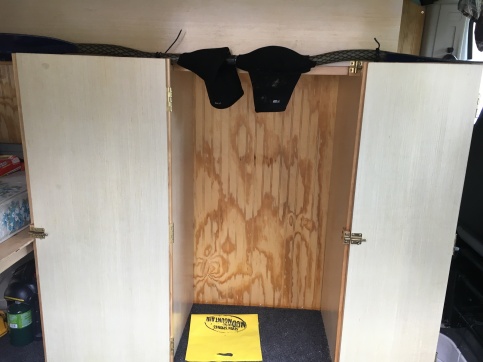 The vertical cabinet on the right has a dowel rod inserted in it so I can hang clothing while the one on the left is open with Tupperware stacked with various items in each ranging from toiletries to books.

Next I went to the passengers side and installed a whiteboard over the recess in the sliding door. I saw a friend have this in Joshua Tree and they were using it to set and mark off climbing goals. I thought this was a great idea, which it was in an arid environment, but not so much when it rains all the time. The fact that it’s on the door means that a lot of moisture comes in every time the door is opened and the sliding side door is an extremely convenient door to use. I don’t think I would do this again. Love the whiteboard concept but would stick it somewhere else. 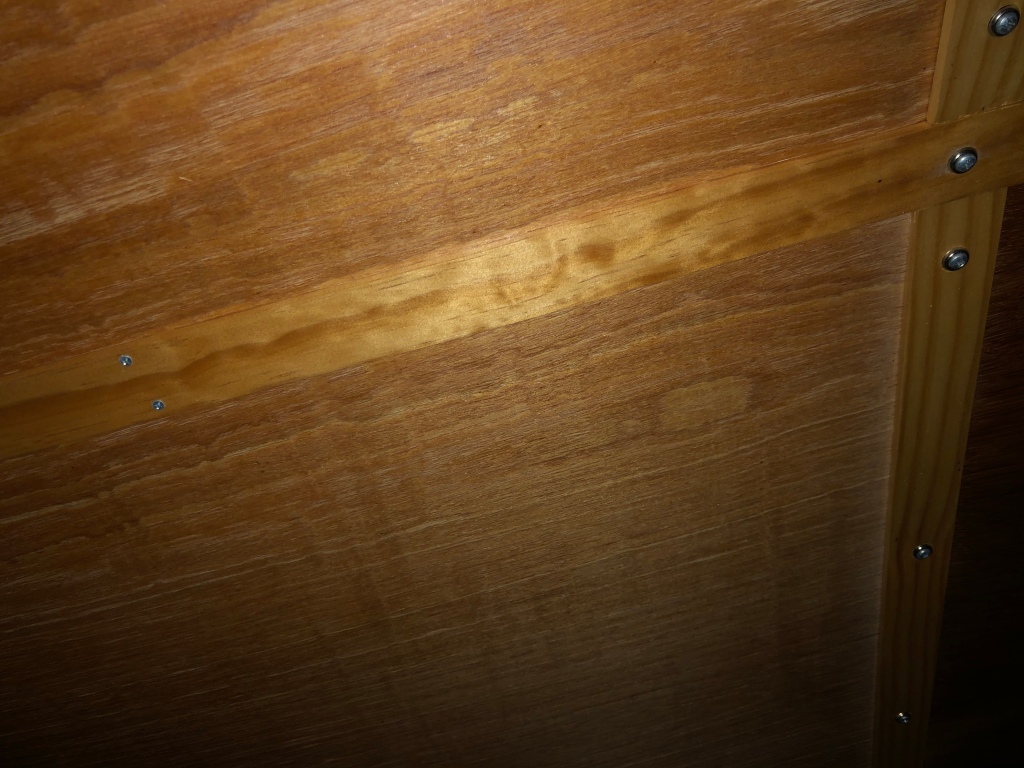 Then came the pine trim to cover the gaps in the Luan. Sad to say but some of the trim is still laying around the house and will probably never get put on because I wanted bug nets with magnets and wasn’t sure how to put them in. A bug net is sold that goes behind the seal on the side door, but I opted to buy two regular door sized nets, trim them then attach them with Velcro. This works fine, the only thing is it doesn’t attach at the bottom, but could be folded under the carpet. I haven’t felt inclined to do so yet, that attitude is why I think the trim will never be finished. 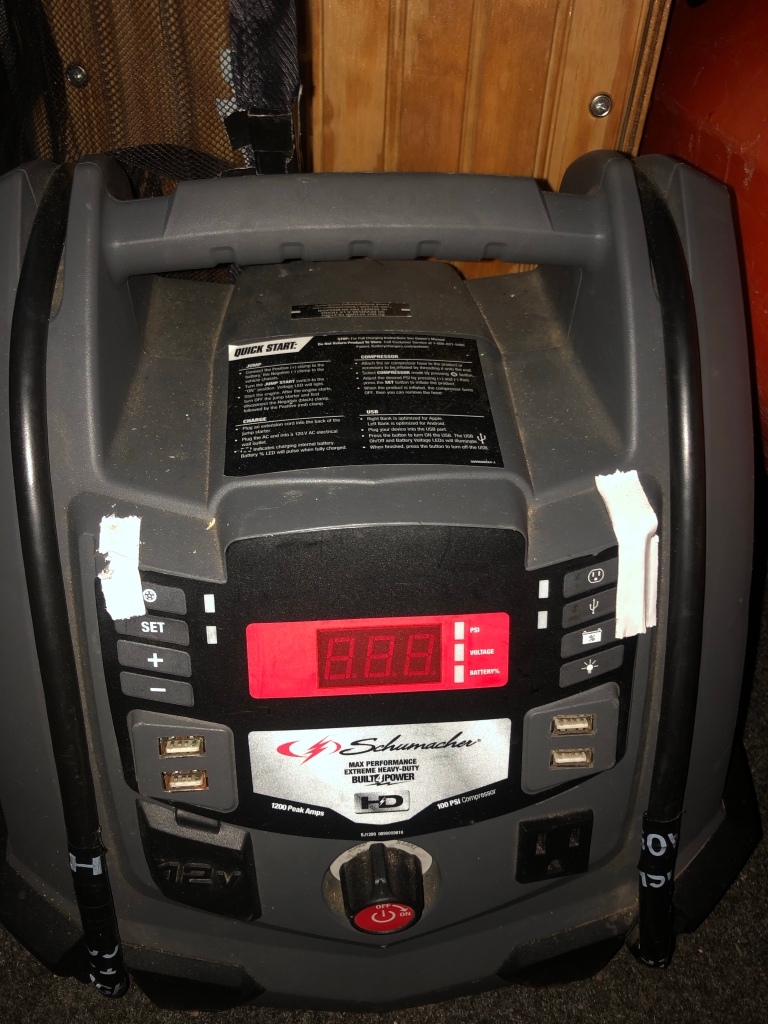 Then came the decision about power…I did “some research” and decided I needed to do more research if I waned to install a solar system myself. However, since I am an 80%er I decided to just buy a battery jumper instead so when I killed my battery running stuff I could just jump it. Luckily my fan takes a couple days to drain my battery without me starting the vehicle and on the plus side the jumper came with an A/C port and 4 USB ports. All this for minimal research I call that a win! Seriously though I don’t think solar was for me. I would have cracked the panels with kayaks loading them on the roof by now if I had them. The option of a suitcase panels for when I am more stationary with the van is an option I am considering. 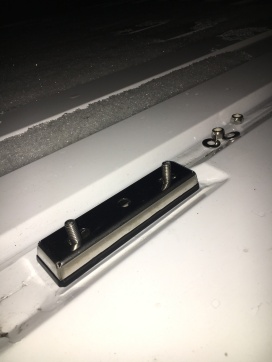 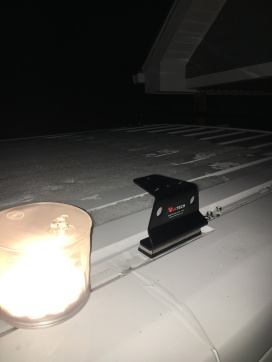 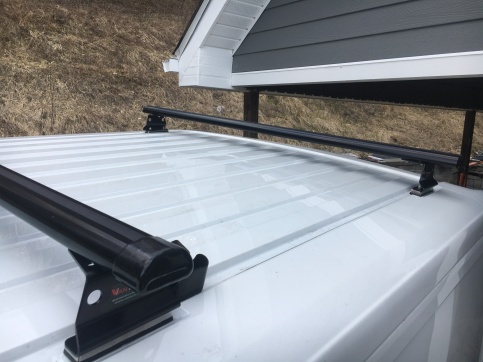 Roof racks and a ladder were next on the list. I got the Van Tech racks since they fit onto the van without any modifications. Really wanted a Rhino-Rack system but wasn’t sure if it would fit over the fan I already installed. The Rhino-Rack has a platform and almost every add on you can think of. I added a couple deck boards to the Van Tech racks to give me room to walk but it is far from a platform. I don’t have an awning on my van yet, with the way the roof drains on the ProMaster 1500 2016 all the water would come down where the sliding door is anyway and run between the door and the awning. If I were more ambitious I could probably make something to divert the water, but then I would miss out on another day of adventuring.
The ladder….. To be continued