I used as much recycled or scrap material as possible for environmental reasons in the van build. That said, unfortunately I still had to purchase a majority of the supplies.

I stripped the van, cleaning it, and adding a insulating carpetish floor before adding the same bed to a different location. It was moved from behind the sliding door which was great for views, but terrible for functionality to the rear of the van positioned across the back with your head towards the passenger sidewall and feet towards the drivers sidewall. It is not always comfortable to sleep in this position since some times the vehicle is parked on an angle causing your head to be positioned downhill, but this is more comfortable then smacking ones head on the cabinets that run almost the length of the drivers sidewall about halfway over the bed. I fabricated the cabinets this way, so I had room to store snowboards inside if need be. 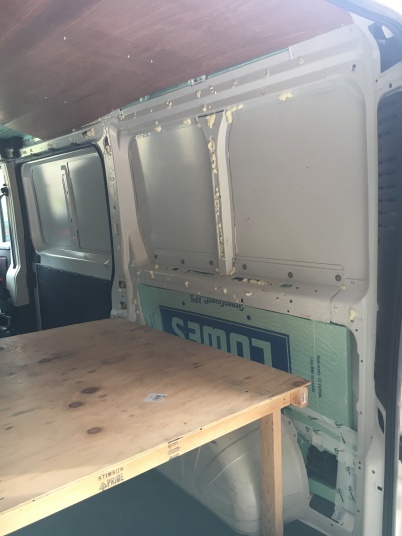 The bed was attached to the wall on the drivers side by bolting it directly into the van; the other side has legs. I chose to have legs on one side so it would allow the bed frame to move a little while driving and absorb some of the road vibrations. This took up some space with legs sticking down, but I thought it was better than the bed frame cracking or breaking. If I build another van I would position the bed to sleep longways sacrificing the room, because at 6’1″ I barely fit diagonally.

Cutting, varnishing, and fitting the cabinets took some time. On the plus side, I managed to get a discount on some of the wood because I got blemished material. They did not fit flush on the first dry fit attempt because of my decision to orient the bed width ways and my height did not allow for framing. It took some time but eventually I got square things to fit in a curved space. The cabinets were mostly attached directly into the ridges on the van. Would definitely frame out a van in the future to make it square before trying to build cabinets. 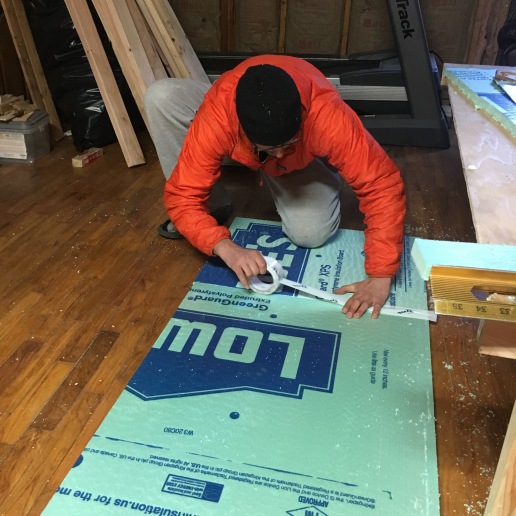 Taping insulation scrapes so not to wast much 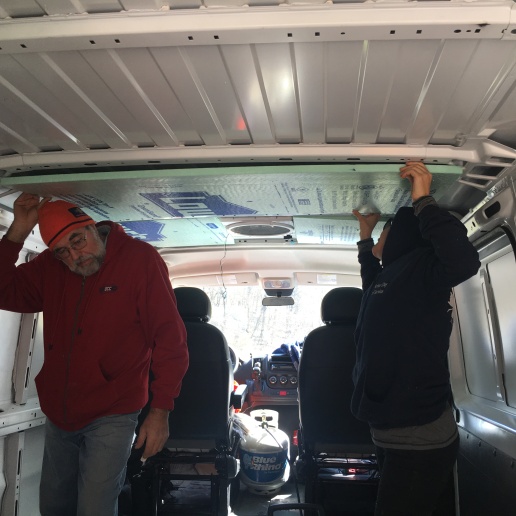 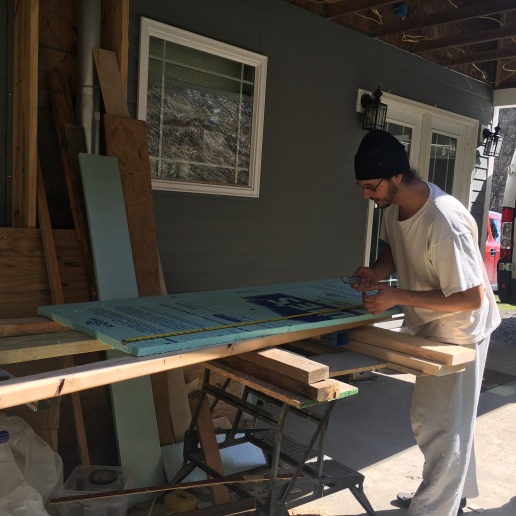 Once the cabinets were made and dry fitted, the insulation was cut and added to the recesses in the van with spray foam added to the ridges. I was able to get some free expired cans of spray foam for the cracks and crevices. I chose 1″ foam board insulation, with an r value of 5, because it fit flush in the recesses of the van. This was again chosen because of my height and trying to sleep width ways. In the future I would just spray foam everything and frame in the sides of the van. 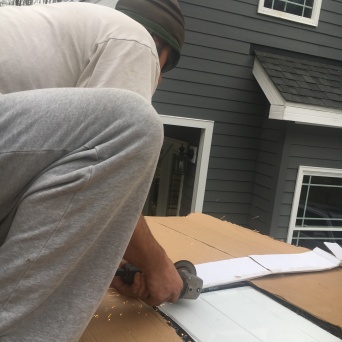 Hope I don’t fuck up 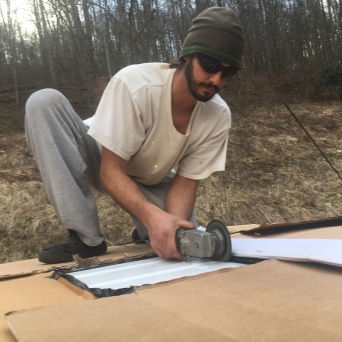 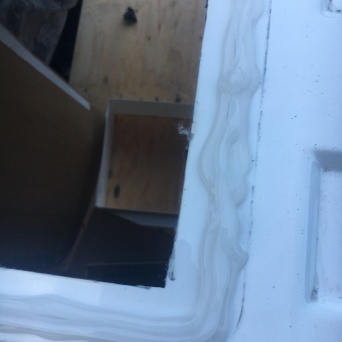 Silicone for the frame of the fan 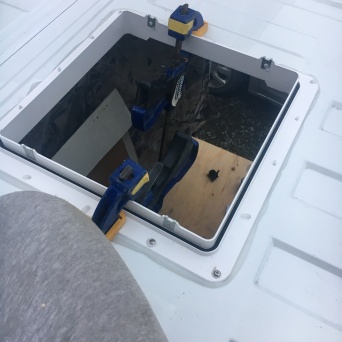 Clamping it for a good seal

Right before the fan is installed 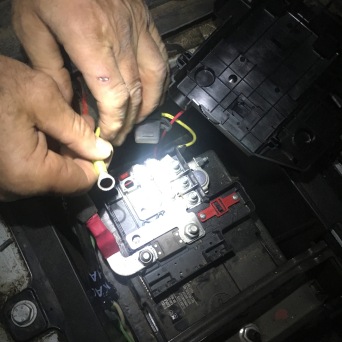 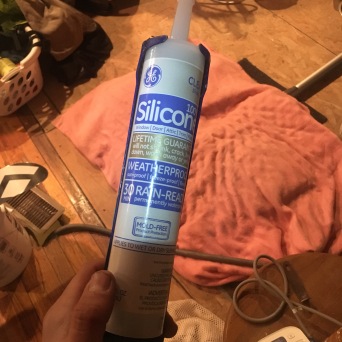 Hopefully this keeps it from leaking

After the insulation was cut and dry fitted, I cut a hole in the roof to install the Maxxfan. I tried to minimized the paint and rug damage that the grinder caused from sparks being thrown everywhere as I ground through the ceiling. Cardboard was placed and taped at strategic locations to help with this. I would say cutting through the ceiling was more nerve wracking then drilling holes into the frame to attach things. I mean if I fucked up the screws made small holes compared to grinding a massive square, hopefully square anyway, hole in the roof! 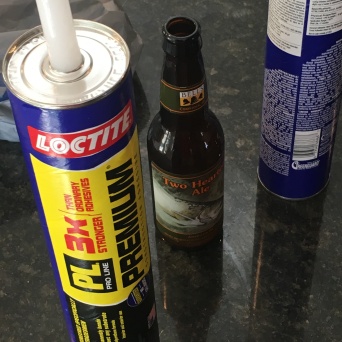 Hope it holds the insulation 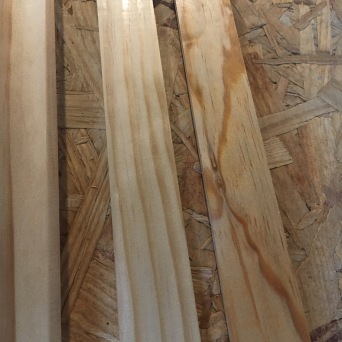 It seems to be holding

Blocking to level out the wall

Last coat of varnish on Luan 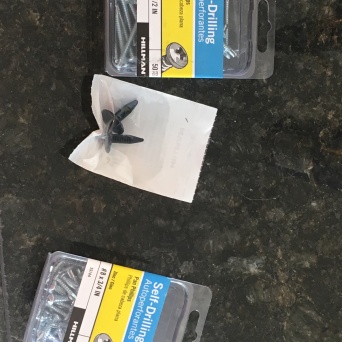 All the insulation was installed with a Locktite type Silicone, this would make sure it stayed in place until I could get the reclaimed walls and mostly reclaimed ceiling into place. The walls are older beadboard that had to have mold sanded off and the ceiling is Luan. After multiple coats of varnish they are screwed into place with self taping screws.

Build to be continued…..

2 thoughts on “The Build”