Waiting for the snow to melt in the relentless blazing sun, I really regret not having sun tan lotion or chap stick. My lips crack as I sip the tiny bit of water that settled in the corner of the pot, a disappointing amount accumulated from the massive amount of snow I had been melting. Taking in the view of the snow covered mountains making a perfect crescent mirror image of themselves in the still indigo water, over the rim of the pot as I finish the last drop of water. Semi hydrated I continued my trek. Aiming for a saddle between the rim of the caldera that formed the lake and a large outcropping of cliffs that ended on the mountain that formed the other side of the saddle, I absentmindedly rub the scab that has formed on the tip of my nose from the unforgiving sun, probably accelerated from my lack of water. Five miles later I had to stop and melt snow for water again with the stove, now extremely low on fuel. I had a splitting headache from dehydration. I melted two pots I was so thirsty. Shortly after I started skiing again I arrived on the south facing side of the lake. I had an amazing view of the lake and there were bare spots lacking snow where I could set up for the night. I shoved a bunch of snow into my water bottle to sleep with to passively melt, since I had limited fuel for melting water. After finishing setting up camp, I rushed down to the rim of the caldera to watch the sunset. The far side of the lake was cast in beautiful pink hues that reflected the snow covered mountains surrounding the lake.

I had terrible cramps during the night, my calves cramping with such force and pain it felt like someone was putting me into an ankle lock. Extending then flexing my leg offered no immediate relief. I really needed to hydrate, laying in pain I decided I would use more fuel tomorrow. I really need to drink enough to relieve this cramping. I had a very fitful night, more cramps and once I woke up thinking I was suffocating. “Get me out of this bag, where’s the zipper? Shit I have the draft color pulled tight. Where’s the cord!? Relax and breath. I can’t, I am suffocating.” Okay I got the cord, damn that’s the one for the hood. Finally I get the two cords released and the zipper open only to realize that I was kind of suffocating. In the night I had managed to scoot around enough that my face was smashed against the bivy’s wall. I opened the bivy all the way and shivered for the rest of the night. Being cold was better then feeling claustrophobic. I got an early start, since I couldn’t go back to sleep. I drank the bottle of snow that had melted in the sleeping bag from the night before. I melted two pots of snow while I was packing and greedily drank them. A couple more cramps made their appearance while skiing that morning, I was beginning to feel mentally and physically exhausted from the lack of water. I melted more snow for lunch and used a garbage bag to get a little more while I made lunch then rested. Feeling physically better from the reprive I pushed on, but route finding was still taking a toll on me mentally. During my last break of the day someone skied passed me and said. “It was great to be following your tracks.” I have to agree with him it was amazing following his tracks. I was on auto pilot, no longer needing to concentrate on reading the topography and finding my way.

My mind free I had more time looking and enjoying my beautiful surroundings. I had veered away from the lake, but the snow covered pine forest had a fairy tale beauty of its own. The silence was only interrupted by the crunch of skis and the occasional sound of the snow rolling down the hill or falling from the tress. The guy I was following took the low route to avoid more avalanche terrain. Following him, looking up at the high route as I went, I could see snow cascading down to the trail from the slope above. There were some interesting snow features along the trail, it appeared that a small piece of snow would breakaway and it roll down the hill as it went collecting the snow like a large fruit rollup, to settle at the base of the hill. 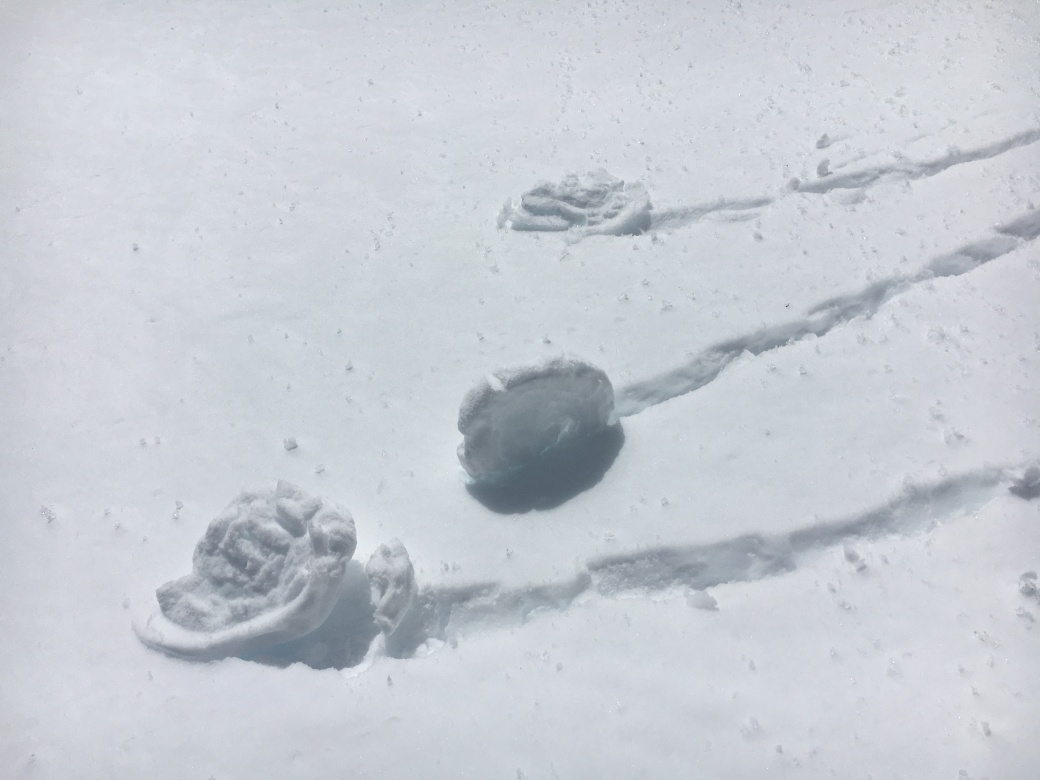 The tracks I was following cut back up the hill a few miles later, consulting my map I decided to do a few extra miles and avoid the steep terrain. Making it back to the van a few miles later having crossed paths with one more group snowshoeing towards me from the parking lot.

Driving back to my new place I reflected on how trying that trip was. I knew going into it that I had the wrong gear (heavy skis downhill and boots, a light sleeping bag, not enough fuel nor sun screen), but the added lack of experience in this environment really made this extended weekend trip feel more challenging then some of my month long adventures.