I talked to the couple for a little bit before skiing off a little ways to give them some space. I didn’t have a shovel to build a platform or wind break in the snow, so I found a sheltered spot in a tree well and stomped a flat platform with my skis.  Setting up in the snow with gusting wind was challenging. Once I was in my bivy sack, I set my stove up to melt snow for drinking water. Once I was set up I pulled out my lighter and instantly dropped it in the snow. It wouldn’t light because of the moisture. Crestfallen I dug through my black MSR bag that I kept all my stove supplies in to get my matches and wouldn’t you know the matches that I have kept in the bag and never had to use for 13 years were not there. Shit I wonder at what point I took them out or lost them. I remember putting them in there before a trip in the Sierras but had no recollection of taking them out! 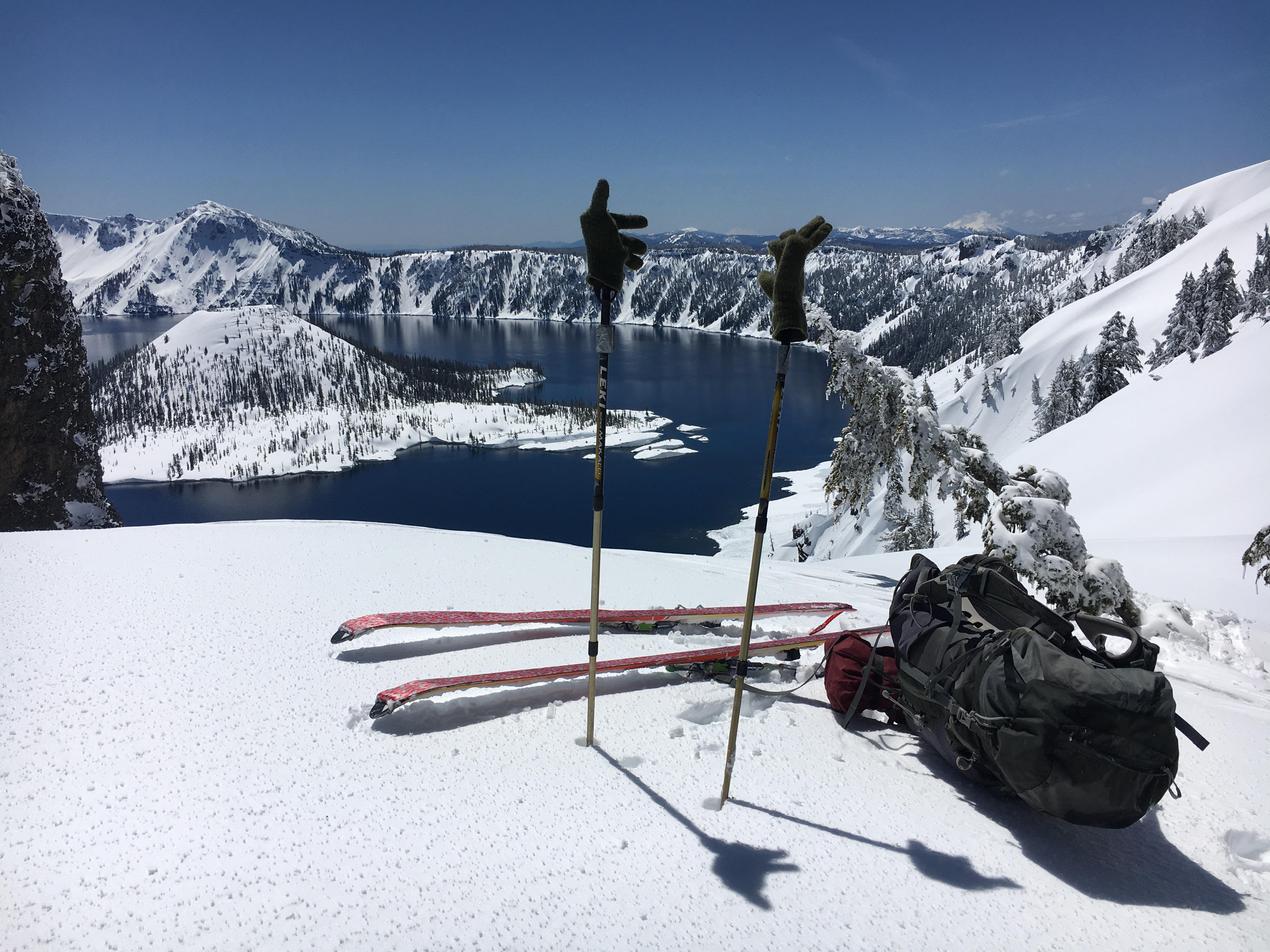 I stuck the lighter in my sleeping bag to dry out and occasionally flicked the flint to speed up the process, the smell of flint occasionally wafting out.  Eventually I got it to work and melted snow to drink. When I was dismantling the stove from the red fuel bottle I noticed that the fuel bottle was over halfway empty. I had forgotten to fill it up before I started the ski trip. I had been using it to make coffee on my cross county trip and I really like coffee so I should have remembered I had used most of the fuel before I left. I would suffer from dehydration for the rest of the trip.

Woke up to a clear blue day after a night freezing and shivering with no sleep. It was 30 degrees when I went to get the permit at 4:30 the previous night and I only had a 20 degree sleeping bag with me. So I knew I was in for a long cold night! I skied up to the rim of the lake multiple times to look at the spectacular view and take photos. Haven’t seen a bad photo of this spectacular place yet. I began to get exhausted around noon from all the side trips to look at the lake. There were also no tracks to follow so route finding took some time with backtracking due to large cornices that could not be skied down. I had to cross an avalanche field at about noon that day. Right before I came to the avalanche field my left ski came off!! This did not instill a sense of confidence in my crossing the slope. As I started across the field I stayed on the ridge as much as possible. Feeling that it would have been better to fall toward the right which was only a 30 foot drop to the snow as compared to the left which would have ended in certain death, buried beneath the snow or bouncing off a tree when a slab broke off. Then I heard a thump…. I closed my eyes and my heart stopped, I thought I was dead. A small slab had broke off the right side and laid 30 feet below me. I instantly thought I am in over my head, I don’t know how to check the snow pack, there are no tracks to follow why are there no tracks!? Do people who actually know this stuff know not to cross!?! I am doing it early while the snow is still firm… that’s a good thing right!?! Okay keep GOING! Suddenly I was on a slope with no more right ridge and its perceived safety. Okay kick the down hill ski in hard like it’s a crampon and repeat. Over and over I repeated this until I was more then halfway across when I noticed the ski on the down hill ski was coming loose. I imagine this is from kicking the edge of the ski into snow with such nervous force from the fear that gripped me. Okay I see a tree well, I just have to make it there. Once there I took my ski off as soon as possible, hastily reattaching the skin not wanting to stay on the avalanche slope any longer then needed. I finally make it across relieved and mentally exhausted, stopping to eat and passively make water by melting the snow on a trash bag and in black pots while I got lost in the view.