Day 65 0 miles PCT – 18 actual, hiked up Half Dome and down into Yosemite Valley stayed at Tuolumne Meadows

Samantha flew out to visit, so I took a break in Mammoth where as one should know the best beer is. It might have been the altitude, but after tasting a sampler I commented to the bar tender how great the beer was. He looked at me pointed towards the wall and said,  “I know.” If I had bothered to pay attention to the decor I would have saw the many awards for the beer advertised on said wall. Well who knew… everyone that pays attention!

Since we had transportation faster than my feet, we went to a couple breweries. We even got to check out a comedy show in Mammoth. The headliner was Rubin Paul. They must not be able to handle their alcohol in Mammoth; two people broke there wine glasses out of less than 100 people, I am guessing, in the venue. For once I was nowhere near the drunkest person! However, in all fairness I did have a sturdier pint glass.

After a second day enjoy 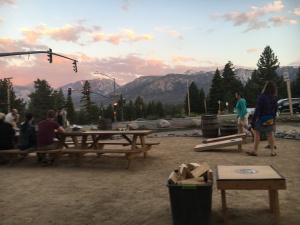 ing the best beer I have had to date, we drove to Yosemite Valley where I ended up spending most of the break. On my break I got to hike 14 miles up to Clouds Rest then 21 miles of trail that I will hike again in a few days once I get back on the PCT in Mammoth and hike back to Yosemite. Yes, I just love being an overachiever. No seriously I was totally tricked into hiking that much, I actually wanted to just eat and stay in an air conditioned room. To my delight I did get a day of laying around and drinking, the only draw back was it was in the sun at a lake beach instead of in a/c.

Went to the Wow Nelly Deli after the big hike and split 3 dinners well we gave it our best college try anyway,  ended up with leftovers for breakfast. You should listen to the Dirtbag Diaries podcast “episode 147 The Mobile” to get the full vision of the Wow Nelly Deli located in the Mobile Gas Station.

After my break it took me two days to hike back to Yosemite. I was limited to how many miles I could do because I was trying to avoid bears. According to the literature I should stay well above the valley then hike out of the other side at least 15 miles.

In highly used areas there are normally problem “animals'”. The problem in my opinion is actually the humans that feed these animals’ causing them to become habituated to easy food. Please don’t feed the cute bear.

Samantha and I had tried to get a permit to hike up Half Dome, but there is this stupid lottery system to protect our natural resources. Someone made it so most of the overused areas are super accessible then decided there was too much use so the use of the area was limited. Just take away the easy access and I bet you won’t need the lottery system anymore and the resource will be better protected. Rant over! Anyway I managed to get a permit with my winning personality once I arrived in Yosemite via foot this time. 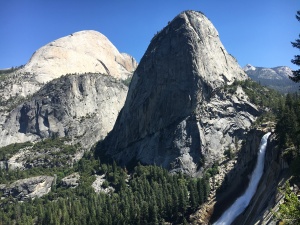