I woke up to a very cold morning, I squirmed out of my bag and exited my tent to retrieve my clothes that I had hung to dry the night before, they were frozen.  I made the executive decision to go back to sleep until it warmed up a little. I couldn’t sleep anymore, but I was not about to leave the comfort of my sleeping bag. Luckily, I had a battery for my iPod and a superfluity of movies to choose from, got to love adventuring in this day and age. I watched about half the Lorax, and then decided it was time to pack up and head out. 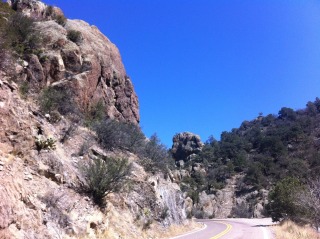 I was in for a treat when I left. I had a fun downhill; this is the first time I had to ride my brakes since the interstate incident.  Hair pin turn after hair pin turn, it was exhilarating! My hands got numb from a combination of cold air and the speed. I pulled off at bottom of first hill, just after crossing into New Mexico.

I ate breakfast in the sun trying to warm up, at the edge of a pine forest. I stopped to eat at a gas station in a tiny town called Buck. It was the best pizza in town said the owner, an older gentleman with a huge smile that showed him to be missing most of his teeth. It was the only pizza in town he informed me. Right after that, still smiling he said, “as a matter of fact it’s the only food in town.” He informed me that it would take him some time to turn on the ovens as he did, he told me where the restroom was and said to go ahead and grab snacks and drinks; he would ring me up when I was done. As I downed a Gatorade and soda, he started making the pizza. When it was in the oven, he came out to join me. He told me about how he used to enjoy flying remote controlled airplanes, but couldn’t anymore due to a pacemaker. He mentioned that he would like to try again, anyway. This prompted a sigh and a headshake from his wife who had joined us by then. He has to settle for golf now that he can’t fly his remote control planes she informed me. They talked about and hated Obama, also. His wife had went to check on my pizza and I could hear her make comments every once in a while. I got the large pizza and to my surprise, I couldn’t finish it. While I was checking out, his wife had bagged the pizza in a Ziploc bag for me so I could carry it on my bike.  He was so proud of the fact that Lance Armstrong had stopped there to eat, also. There is race in Silver City and he came to it. The old man said, “most people were worked up and did not want him to race in it.” He and his team did it without being counted in the race. They beat everyone by an hour, but they did not count it. As I cycled out of town, I realized the place I stopped to eat was the only place in town besides a post office.  Stayed at a KOA in Silver City have a huge climb over Emory Pass tomorrow.