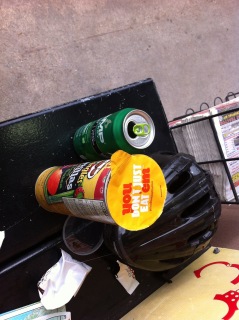 There was a climb again today. Why is everything always uphill? This did not help my stomach at all. I noticed snow covered mountains in the distance and I was headed to Emory Pass the highest point on my route, at 8,228 ft.  As soon as I started feeling better, I stopped for a break and started eating my Little Debbie supply. I was hungry all the time. The good news was there were gas stations every day except for the few sections of the route that were around 100 miles. The bad news was there were gas stations. Eating over 4,000 calories from a gas station is easy, just not healthy. Little Debbies, Reese’s Pieces, Oreos, Pringles, Doritos, ……. and the best post ride recovery drink, beer.

At one of the stops when I was eating yet again, a truck pulled up. Two guys hopped out and started brushing the debris from just outside of the white line on the road toward the edge. Where were they when I was getting all the flats? I said, “hi”, they nodded finished sweeping, then walked toward me. One guy said I have those pedals and shoes for my mt. bike. I said, “yea, I took them off mine before I left.”  They commented about the size of my tires, apparently they were too big. I would get these comments a lot, mostly from people who I passed. My tired annoyed reply would be “well I am passing you. If I wasn’t exhausted, I would simply say,” I know it’s what came with the bike. I am raftguide/ski bum and can’t afford new ones.” The other road sweeper asked what type of bike it was. I replied, “the cheapest one that I thought would get the job done.” I got a Novar Safari from REI. I had used my dividends to get it cheaper. I told them about how I used that credit card for all my purchases the prior year, so I could accrue points to put towards a bike. I inquired as to why they were sweeping the road. They told me about a cycling race today and they were cleaning off the berm for the racers. We talked about the race for a little bit, they told me to be careful because a cyclist had been killed by a driver on her phone close to there. I thanked them, we said our good byes then they sped off down the road a few feet, slammed on their brakes then sweep some more. We leaped frog back and forth a few times, at this point I was still extremely nervous about traffic and stayed as far off the road as the berm would allow. The next time they went passed, they swerved onto the berm and slammed on their brakes right in front of me, forcing me out into oncoming traffic. It just so happened that said traffic was right beside me, I sucked in my breath and probably closed my eyes. I know that is counter intuitive, but I am still alive. I instantly thought back to their warning about being careful and thought that ironic. I stopped to let them get far far far ahead and to eat again, okay mostly eat again.

I saw a bunch of racers flying down the hill on the opposite side of me while I was struggling up another climb. I remember thinking how light their bikes looked without the panniers. I had a lot of support that day, everyone was cheering me on as I climbed the hill. After an stop at another gas station for more junk food, the rest of the day was uneventful, just more climbing with the occasional exciting downhill. I did, however, get chased again. This time the culprits were tumble weeds blowing behind me. I grabbed my pepper spray to practice, it was more accessible this time and I had it ready before the tumble weeds caught me. Direct hit they left me alone after that.

Stayed at Coal Creek Campground in AZ at about 5,750 ft elevation.