My morning started early with me packing in a hurry because my bivy was located in shrub’s along the road near the border on who knows whose property.   In my race to pack up and leave before I was discovered, I accidently discharged pepper spray in my bag. I did not have much water to clean the pepper spray up 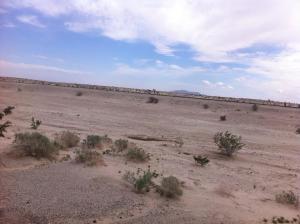 with because I did not get a chance to fill my water the night before, because of the allusive campsite. I wiped my hands off in dirt and then cleaned them with an extra sock, because I could not risk using what little precious water I had left.  With the smell of hot peppers permeating the air, I ate my cliff bars for breakfast, they had a hint of spice to them to go along with the locale. This set the tune for the day.

On my ride back to the road, I passed a border patrol station not far from my bivy and the disappearing water bottle site. They must not have been on their game that night. I wasn’t harassed and a large amount of water was carried off in the dark.

On the major downhill section, flying at about 45mph because I panicked from flashing back to the wobble incident with the old ladies when I hit 52 mph I got a flat. Crosswinds and semis flying by combined with the flat lead to my fear. I stated to wobble, but managed to the get the bike under control. I got off the bike excited to still be alive, and took a deep breath. Some time passed while I stared at the bike, it was time to change a flat. I have done this before but it was years ago.

An older guy peddled up on a recumbent bike and asked if I was okay, needed any help and what happened. He was on course for a big mile day with the downhill section. He commented that I was lucky that it wasn’t a front tire on the downhill at those speeds. He was averaging around 50 mph on the downhill, he must have had bigger kahunas then me. As he sped off and I looked at the flat thinking about the last time I changed one, I kind of wished I had asked for help.

It was hot and noisy while I changed the tire. The whoosh of the semis flying by accompanied by the dust they kicked up was distracting. I had just separated the chain and went to make a mental note of how the chain was run around the rear derailleur when it slipped from my fingers and came off, oh well I had to just wing it. I

got everything back together and reloaded my bike.

I took off running pushing my bike and jumped on and clipped in the pedals and the tire was flat again, now I had no spare tubes once it was repaired again. It took half the time to change the tube in the tire this time. I learned a lot from the first one, like how to use the co2 inflator I had never used before. I wasted two co2 cartridges the first time. After topping the tire off with the  hand  pump, I decided it get more co2 cartridges asap.

I made it to, El Centro, the next city with a bike shop which was about 50 miles from my last flat, hurray. I went to the bike shop to get new tubes, co2 cartridges and ask about why the second tube was leaking where the valve met the tube, I wanted to see if that was normal. I told the guy behind the counter, a portly looking fellow, I did not have much bike experience but my spare leaked at the valve. I asked for the new tubes and co2 cartridges but wasn’t sure about the sizes. He said in a really snotty tone, “what do you think you’re doing, it doesn’t sound like you know a lot about bikes?”  My quick reply without thinking was, “well it doesn’t look like you ride bikes much!” In my head, “shit now I am not going to get any more help!” So armed with two more spare tubes and 5 co2 cartridges, the hell with that bike pump, I go outside and thunder starts. I was quite a few miles from Deb and Pete’s daughters which I had been invited to for food, a shower and a place to sleep. I unlocked my bike and as I go to ride off, my back tire is flat again. Fuck now I only had one spare tube again! It was leaking at the same place, can’t patch it at the value.

While I was changing the tire rain started, luckily I was under an awning.  Two guys started fighting next to me, nothing much a few punches and a lot of shit talk. A cop came and asked what I saw. I said, “nothing really.”  He said, “but you were right here?”  I replied, “I was busy, I had my own problems.” While changing the tire I noticed the rear derailleur was rubbing the chain, oops I put it on wrong earlier. I solved the problem with the derailleur now I just had to figure out the flat tires. I wasn’t going to Pete and Deb’s daughters in this storm. I pulled my map out and saw two camp spots, I called the first it only took RV’s , same with the second one. This was going to be a problem. I opted for a hotel because it was storming, dark, and I was in town and I needed soap and water to find the holes to patch my tubes.